Hawaii Fiction Writers welcomes its newest member, Dawn Knox!  Dawn lives and writes in the UK (we may have to change our name to Hawaii Fiction Writers International).  We asked Dawn to share her experience writing about World War One.  The Great War (2016, available on Amazon) is a well researched, remarkable collection of 100 stories.  Each story is exactly 100 words, a prose narrative with the emotional power of poetry.

Thank you, Dawn, for this gift, and for sharing your experience! 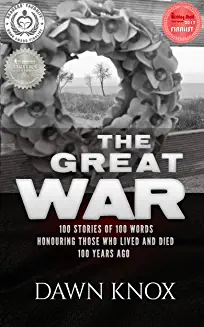 The Great War – 100 Stories of 100 Words Honouring Those Who Lived and Died 100 Years Ago wasn’t a book I set out to publish – it came about by accident. If anyone had suggested it to me, I’d have doubted I’d be able to write 100 stories of exactly 100 words. I actually intended to write about two or three 100 word stories – or drabbles – to give to some friends who ran the Forget Never Project which was set up in 2014 to commemorate the centenary of the Great War but the ideas flowed and the more I wrote, the more ideas I had.

I thought I’d simply pick those I liked best to give to my friends. However, once I’d written about fifty, it occurred to me it would be interesting if I could make it to one hundred. To my amazement, I achieved that.

I set out to write about various aspects of the war, both abroad and at home from different viewpoints – male, female, young and old. I wanted to show that ordinary people of all sides shared the same horrors and pain and so, as often as I could, I didn’t reveal the nationality of people in the stories. The agony of a mother losing a son would have been the same wherever she lived and for whichever country her son had fought.

Some of the stories are based on real events, such as ‘Outstanding Courage’ which I think is my favourite. I like it because it shows the bravery of the British officer and the compassion of the Germans who applauded his courage. This true story reminds me that despite the killing and savagery, the goodness of humanity was not extinguished.

Armed with a revolver, the officer climbs over the parapet and marches, as if on parade, across the ravages of No Man’s Land.

Friendly eyes follow his progress, wide in disbelief, whilst enemy eyes line him up in their rifle sights.

He’s aware of the danger, but bravely strides towards the injured infantryman, hanging wounded and broken on the barbed wire.

Such an easy target.

But as the officer disentangles the soldier and carries him to safety on his shoulder, cheering is heard from the enemy lines.

And there, amidst the slaughter, enemies forget their differences and salute outstanding courage.

The book has been a finalist in three book awards: Readers Favorite 2016, The Wishing Shelf Book Awards 2017 and The Independent Author Network 2018