"Low hanging fruit."  Easier to pick. There for the taking. Why venture higher when there's good fruit you don't even need a ladder for, or maybe just a short ladder?


I hear that phrase now and then in different contexts, often from some voice on radio or TV. When they use the familiar phrase do they see the image in the metaphor? Do they see a tree with low hanging fruit, and perhaps someone picking? 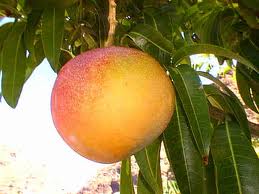 When I hear "low hanging fruit," an image of a mango tree immediately flashes in my head. Not just any mango tree, although where I live in Kapahulu/Kaimuki, on the island of Oahu, there are beautiful, fantastic Hayden mango trees on every block. I see a mango tree that is no longer there. It's the large old mango tree that used to grace the front yard of a sturdy Japanese-American home built by the family patriarch and his brothers in the 1940s. I came to know the tree because I had met and quickly married the younger daughter.
After a couple of years on Maui, I moved with my homesick honey to Honolulu, where we found an apartment just a couple doors down from that family home, and the tree whose branches gave shade to the whole front yard. We had moved in January, so I enjoyed watching the fruit develop on the great mango tree. On into the spring I anticipated the day when the first red-yellow-green fruit would be ready to eat.
I already knew how ono the mango would be, sliced and juicy, often served with a scoop of vanilla ice cream. What I didn't know was the whole process of mango picking. One warm Saturday morning my wife invited me to join in the first picking of the season. The older sister was there with her husband and their two kids. The grandparents presided over the ritual--Grandpa perched in the tree and Grandma standing at the command post on the front porch. Bamboo and aluminum poles awaited us, and a child's red wagon to hold the prizes.
The picking began. After standing innocently by as a spectator for a while, I was presented with the longest pole. I gazed into the heavens, trying to see what everyone was pointing at, and there they were, the high mangoes. Now all was made clear, revealed in an instant. My job was to reach the high mangoes. Had the family given the younger daughter (all 4'9" of her) the mission of finding a six-footer for this very day? I was too polite to ask, but I had my suspicions.
Several years later, when I set out to write my first short story to be set in Hawaii, I chose to tell the story of that experience, the mango picking, told from the first-person point of view of the unsuspecting Caucasian man who had married into the short Japanese-American family and then waited two years before moving from Maui to Oahu to fulfill his destiny as the picker of the high mangoes on that magnificent family tree. The result was "Mango Lessons," a story published later on by Bamboo Ridge Press.
Low hanging fruit? Don't talk to me about low hanging fruit. I believe we need to aspire to something higher. Something more difficult, but ultimately more rewarding. That ancient tree still lives in the pages of a book, in the words of a story that reminds me of the long strange trip I took in my life from Texas to Seattle to Maui, and ultimately to my island home on Oahu, where in my mind's eye I can still see the family gathered around the great tree, pointing to the large beauties waiting in the high branches. Someone else can take the low hanging fruit. Hand me the long bamboo pole.
Posted by Michael Little at 10:06 PM