Recently I’ve gone to wrack and ruin. Just for a visit. It’s been good for my creative spirit. Ruins dot the hills and countryside all over Austria and Hungary, perched on craggy peaks above sleepy villages, overlooking trade routes along the Danube, crumbling in meadows now bordered by autobahns. What fodder for imagination! 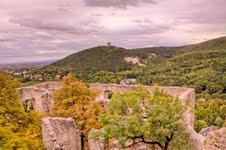 If stone walls could talk, the stories they would tell. I marvel at the toll of human labor involved in building even an ordinary castle. (Is ordinary castle an oxymoron?) The foundation might be a rocky outcropping, but walls are hand-hewn stones usually carried up to those lofty peaks. No cranes, no cement trucks, front loaders, power tools, log planers or technical device. It often took decades, even generations, to complete the royal abode and its fortifications. But the structures endure. Some survive major fires, sieges, and the relentless passage of time, not intact, but as sketches of their former selves.
I wander through a vaulted entry and climb an uneven chiseled stairway to peer into the shell of a room. Sleeping quarters? Nursery? Walk-in closet for Her Majesty’s gowns? It’s not the open-air rooms that intrigue me, but the people who lived and loved here down through the centuries. Did Her Majesty of the late 1600s mercilessly nag His Majesty to redecorate their personal suite into something with, say, less space for his armor and more for her armoire? Half a century later, would the lady of the realm threaten the lord of same with sleeping in the stable unless he installed a new cockle oven to heat those cold stone walls? Did he mention the fire hazard and get her a new duvet instead?
And those are just the inhabitants of record. More intriguing than the landed gentry are the commoners, for each castle is a working village unto itself. It took a small army just to feed the army. Masons and millers, cooks and coopers, shepherds and soldiers all paid allegiance to the king. However small the fiefdom, it’s clear that social structure governed their lives. Oh, the conflict inherent in a hierarchy of rich vs. poor. It’s enough to give a writer dreams of lonely knights and dirndl-clad milkmaids.
The personal intrigue could play out against a backdrop of history, real or imagined. What threats were visible through the narrow slats in the exterior walls designed for an archer’s arrow! How many peasants would it take to operate a catapult? Scenes of courage unfold as the siege continues, and the commoners who took refuge inside the walls discover their wells have been poisoned. On the opposing side, what prize would be worthwhile to the invading hordes? The views are spectacular, but surely they missed their hometowns, their families, sleeping in their own hovels.
Later, I pick my way down the path toward town and a shower with hot, running water. Clean linens, electric lights, Wi-Fi, and other creature comforts beyond the wildest fantasies of the castle dwellers await me. My daypack is much lighter, but my mind is full of people and stories yet to take shape.
Posted by Michael Little at 8:20 PM